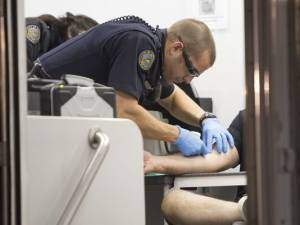 Two recent United States Supreme Court cases, Missouri v. McNeely in 2013, and Birchfield v. North Dakota, in 2016, have changed the criteria for police officers collecting blood for a DUI suspect who is only suspected of driving under the influence of alcohol, for the State’s implied consent test.

Alcohol is the suspected cause of driving while impaired in over 90% of all DUI-DWI arrests.

DUI blood tests cannot be given at the side of the road, except in Arizona, where the Constitution is kept in the cellar. After Birchfield and McNeely, this likely requires the AZ police to get an electronic warrant, if the roadside collection of blood by Arizona officers is still being done.

That is why the most common test used for DUI arrests is a DUI breath test, by more than a 10 to 1 margin.  Some states (e.g., California and South Carolina) REQUIRE that a DUI alcohol suspect be offered a breath test, and not a DUI blood test, if he or she is conscious.  Other states permit the officer in the field to choose which kind of test or tests are to be administered, whether the person is conscious or not.

Other states don’t do DUI urine tests at all.  So, if you are suspected of DUI / DWI of alcohol in South Carolina, you will be offered only ONE test, and that will be the breath test. Using a urine test in Georgia is limited to possible DUI-drugs tests, not DUI-alcohol.

Like most matters relating to DUI / DWI arrests, issues relating to DUI blood tests are controlled by state laws.  Each state typically has guidelines stating by whom and how these tests are to be taken, transported, preserved, secured, analyzed, etc.  REGULATIONS and statutes (laws) governing collecting and testing biological specimens (substances taken from a person’s body) will determine the proper methods in your state.

Good DUI and DWI trial lawyers know that fighting DUI blood tests can be easier than fighting DUI breath tests in many cases.  Blood samples are often difficult to track (i.e., prove the chain of custody), and a missing link in the chain may result in acquittal, due to no admissible blood test evidence in the case.

The preferred method of blood analysis is a process called gas chromatography or GC.  This testing method utilizes a measuring technique of comparison of a known standard to the subject’s sample.  These standards are typically certified pre-mix solutions, which have been tested and re-tested for being accurate and reliable markers for the GC device.

If an officer suspects that drugs are all or part of the impairing substance in your system, most states permit the officer to demand a blood sample, a urine sample, or both blood and urine.  When a crime lab checks for drugs (other than alcohol), a different device is used.

The internationally accepted standard for such testing is a GC-MS (gas chromatography, mass spectrophotometry) device.  This piece of equipment is capable of isolating and identifying a wide range of drugs, including prescription drugs and illegal (contraband) drugs.  It does this by matching the digitally produced peaks appearing on a graph-like sheet of computer paper.

The computer tracks the time of the introduction of the sample and the exit of the sample from the device and then identifies the substance based on the retention time (how long it took the substance to pass through a column packed with inert material).

Charts and notebooks are kept in the crime lab which tell the lab scientists how long each substance takes to pass through the column.  That way, once the printout of the peaks is finished, the laboratory chemist can compare the time of retention to the lab notebooks showing retention times for drugs or other chemicals.

Furthermore, the laboratory will usually run a quick series of immunoassay  tests on a different device BEFORE running the time-consuming GC-MS tests.  These immunoassay tests are looking for common drugs of abuse, such as opiates, cannabinoids (marijuana), sedatives, pain killers, etc.

If these immunoassay tests come back NEGATIVE, the lab will usually report that the sample did not have any type of drugs in it.  If any class of drugs shows POSITIVE, the GC-MS will be set up to look for common drugs in that class  (e.g., sedatives) in the blood sample.

Some states have developed a fairly lax set of rules for blood testing, whereby testing methods other than GC and GC-MS can be used.  In most hospitals, alternative testing methods are often utilized, because they are FASTER.

Time is money in a hospital.  Plus, emergency situations call for quicker testing methods than the laborious process of setting up a proper GC or GC-MS test.  One major difference in most hospital tests is that these are often done on blood serum, not the whole blood.

Can my DUI blood test results be challenged?

Any testing institution that is less reliable than your state’s crime lab is subject to legal challenge on even more grounds than those surrounding a state crime lab challenge.  A good DUI / DWI trial attorney will be well versed on these legal and scientific challenges, if such second rate, less reliable methods have been used.

Remember, a state crime lab is operated by people. Sometimes, people make errors. People also change jobs and move away.  Sometimes, errors in the operation of the GC or GC-MS instruments, loss of the chain of custody documents or witnesses, or simply being unable to convince a jury of the reliability of the test results can result in an acquittal.

Don’t despair if a blood test was done at the time of your DUI arrest.  This may work to your advantage, if you hire a skilled drunk driving defense lawyer to handle your case.

Call us at 1-888-843-6384 anytime day or night. Your first arraignment may be coming up very soon. The earlier our best DUI attorneys can start on your defense, the better chance you have at an acquittal.