DUI checkpoints, or “sobriety checkpoints,” have become a profit center for local police departments and their city government. Although intended to deter drunk drivers, a DUI checkpoint usually results in many types of tickets being written other than DUI-DWI. Plus, some felony or misdemeanor violations may be detected. Beyond making a lot of money for their departments, many police officers now use checkpoints to increase total DUI-DWI arrests and meet department quotas or federal grant quotas. While these random “safety checkpoints” may seem like entrapment, the U.S. Supreme Court has ruled in several cases that “safety” roadblocks or sobriety checkpoints that FOLLOW STRICT GUIDELINES not violate the United States Constitution’s Fourth Amendment.

If you were stopped at a DUI checkpoint and arrested for driving under the influence, all is not lost. An arrest is not a conviction™! Consult FREE right now with one of the country’s leading DUI attorneys in your area. Hire a DUI lawyer who knows how to attack police checkpoints, which can result in a total dismissal of all charges…even if it was a felony offense. 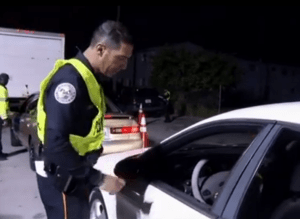 Caught by the Chase Car?

Virtually every DWI checkpoint has a police “chase car.” This is an officer waiting near a police checkpoint in an idling vehicle at a strategic vantage point to see any vehicles that attempt to avoid the road block. These “chase officers” assume that ANY vehicle turning away from the sobriety checkpoint is trying to avoid detection for possible impaired driving.

Several checkpoint cases across the USA have held that you do not have to be delayed at an upcoming DUI roadblock. A driver who perceives the police lights to be an accident scene that is delaying traffic, may turn off or depart by another route if a safe, legal way is available to leave and not pass through the safety checkpoint. However, making an unsafe or illegal maneuver in turning around at a sobriety checkpoint or license checkpoint may authorize a chase car or motorcycle cop to legally stop your vehicle.

DUI checkpoints may be constitutionally permissible in your state, but errors in police procedure at checkpoints are common. A knowledgeable DWI lawyer will uncover and attack every single police error made. 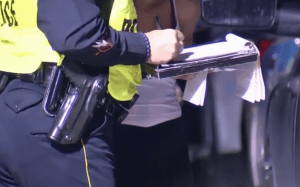 To help your DUI-DWI specialist to identify flaws in the DUI checkpoint, try to remember everything you saw and heard at the sobriety checkpoint.

A top DUI lawyer will sift through every detail of your roadblock detention and subsequent DUI arrest to find procedural errors, supervision errors, or any other illegal actions taken by police. A targeted motion to suppress the 4th Amendment violation can END THE DRUNK DRIVING CASE with an order granting suppression of all evidence obtained after the unconstitutional search and seizure.

Landmark Case of Michigan v. Sitz Has Dominated Litigation About DUI Checkpoints for Over 25 Years

Michigan Department of State Police v. Sitz, decided by the United States Supreme Court in a 6-3 opinion issued June 14, 1990, should be mentioned here. The official cite for the case is 496 U.S. 444. This decision has been a cornerstone of later opinions by the U. S. Supreme Court and many state appellate courts.

Ironically, after reversing the Defendant’s order (from the Michigan trial judge) dismissing the driving while intoxicated case against Mr. Sitz, the Michigan case against him was then remanded to the Michigan trial court, where the OWI lawyer representing Sitz immediately sought to have the validity of the OWI checkpoint reconsidered as a violation of STATE constitution. The trial judge, after getting the case back, agreed with the criminal defense attorney and ruled that a DUI checkpoint DID violate the Michigan Constitution. This was upheld by the Michigan Supreme Court. Sitz v. Department of State Police, 443 Mich. 74 (Mich. Sup. Ct., September 14, 1993).

Random, warrantless police checkpoints for interdicting drunken driving were then ruled to be unconstitutional under STATE law in Michigan, a tactic taken by more than a dozen other states since that time. Another excellent legal point from this landmark cases is to see how the drunk driving lawyer representing his client fought and fought, until the case against his client was dismissed entirely, as being made on an unconstitutional seizure and detention.

How the opinion was stated by the majority:

Petitioners, the Michigan State Police Department and its Director, established a highway sobriety checkpoint program with guidelines governing checkpoint operations, site selection, and publicity. During the only operation to date, 126 vehicles passed through the checkpoint, the average delay per vehicle was 25 seconds, and two drivers were arrested for driving under the influence. The day before that operation, respondents, licensed Michigan drivers, filed suit in a county court seeking declaratory and injunctive relief from potential subjection to the checkpoints. After a trial, at which the court heard extensive testimony concerning, among other things, the “effectiveness” of such programs, the court applied the balancing test of Brown v. Texas, and ruled that the State’s program violated the Fourth Amendment. The State Court of Appeals affirmed, agreeing with the lower court’s findings that the State has a “grave and legitimate” interest in curbing drunken driving; that sobriety checkpoint programs are generally ineffective and, therefore, do not significantly further that interest; and that, while the checkpoints’ objective intrusion on individual liberties is slight, their “subjective intrusion” is substantial.
Held: Petitioner’s highway sobriety checkpoint program is consistent with the Fourth Amendment.

A lot of manpower was delegated to this DUI checkpoint, and the cost-effectiveness of this police checkpoint is dubious:

The first — and to date the only — sobriety checkpoint operated under the program was conducted in Saginaw County with the assistance of the Saginaw County Sheriff’s Department. During the hour-and-fifteen-minute duration of the checkpoint’s operation, 126 vehicles passed through the checkpoint. The average delay for each vehicle was approximately 25 seconds. Two drivers were detained for field sobriety testing, and one of the two was arrested for driving under the influence of alcohol. A third driver who drove through without stopping was pulled over by an officer in an observation vehicle and arrested for driving under the influence.

The dissent was led by Justice Brennan, who found that the majority “stretched” its facts to overturn the original Michigan OWI case, which had ruled in favor of Mr. Sitz:

Today, the Court rejects a Fourth Amendment challenge to a sobriety checkpoint policy in which police stop all cars and inspect all drivers for signs of intoxication without any individualized suspicion that a specific driver is intoxicated. The Court does so by balancing the State’s interest in preventing drunken driving, the extent to which this system can reasonably be said to advance that interest, and the degree of intrusion upon individual motorists who are briefly stopped.
For the reasons stated by JUSTICE STEVENS in Parts I and II of his dissenting opinion, I agree that the Court misapplies that test by undervaluing the nature of the intrusion and exaggerating the law enforcement need to use the roadblocks to prevent drunken driving.

This high court opinion in 1990 has been the modern starting point for most DUI checkpoint analysis. Like this opinion, the nation is divided on the propriety of roadblocks of any type, since no American likes to be stopped, questioned, or detained by police without a good reason to believe that a crime has been committed.

Contact GA DUI lawyer William C. Head for help with a GA DUI checkpoint arrest or in any other state.